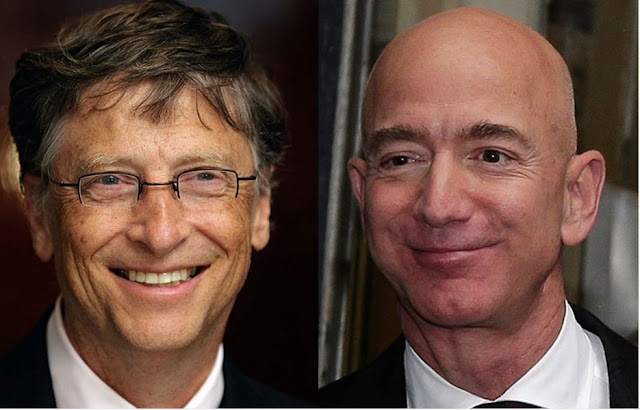 Microsoft Corp. co-founder Bill Gates overtook Amazon.com Inc.’s Jeff Bezos as the world’s richest person on Friday, reclaiming the top ranking for the first time in more than two years.
Gates may have been helped in part by the Pentagon’s surprise decision announced Oct. 25 to award a $10 billion cloud-computing contract to Microsoft over Amazon. Shares of Microsoft have since climbed 4%, giving Gates a $110 billion fortune, according to the Bloomberg Billionaires Index. Amazon’s stock is down about 2% since the announcement, putting Bezos’s net worth at $108.7 billion.
Gates, 64, had briefly topped Bezos, 55, on an intraday basis last month after Amazon posted its first profit drop in two years, but shares of the world’s biggest online retailer pared the decline. The index, which tracks the wealth of the richest 500 people, is updated each trading day after U.S. markets close. Europe’s richest person, Bernard Arnault, is third with $102.7 billion.